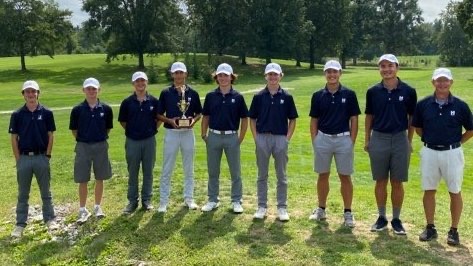 Awesome job, guys! Check out the info below courtesy of Coach V!

FAST FACTS:
44th Annual Richard Pfeiffer Invitational
Sept 11 at Windmill Lakes
Sept 12 at Twin Lakes
Hudson’s 31st appearance in the event
Hudson has now won the event 12 times.
Coop Pamer/Hudson was medalist in 2019.
Coop Pamer repeats as winner in 2020.
Hudson’s last team win at this event was 2014
Will Kurtz was the last repeat medalist for Hudson in 2013 and 2014
2 day team score of 597 is the second lowest in the history of the event.
Hudson holds the event record with 584 in 2004 (not the same 2 courses back then)
The HHS Boys Varsity team has now broken 300 in 3 of 10 tournament rounds this season
Hudson broke 300 in both days of the event (298 at Windmill and 299 at Twin Lakes)

MORE
Coop Pamer, Junior, Medalist
Medalist in 2019 too
Josh Pethel
Runner up, 2020
HHS Winner
2 day total 597
COACH VILLENAUVE
On Jackson Choi: “Jackson really turned it on when when we needed him most. We really needed a 4th score to close the door and Jackson lights up a saucy 75. Jackson’s short game was rock-solid at Twin Lakes. It has to be to score on that course. I am so happy for Jackson. He has been putting in the time waiting for all cylinders to click.”

On Coop Pamer: “I love that Coop is never satisfied with his game. The great golfers are that way. Coop tosses 74-71 on the board over two days and cant stop thinking about the 5 footers he missed. 71 is fabulous number at Twin Lakes and as a back-to-back winner, Coop joins some awesome Hudson company. Hudson repeat winners include Will Kurtz (13-14), Andy Phipps (94-95). John Hahn won it twice in 03 and 06.”

On Josh Pethel: “As a team we have continued to talk about level heart rate and keeping emotions in check. Nobody does it better than Josh. If he blows up a hole, he stays the course and finds a way to get the strokes back. Josh does a striking job of breaking down his stats to help him focus on the lagging parts of his game. He’s a huge piece of this team. That shows in his two second place finishes this season.”

On the team: “We continue to raise the bar as we get closer to October. These men are so focused and so driven to close the gaps in their game. They know that great rounds and team results will come if we continue to tighten up our weaknesses. They are all giving maximum effort.”
COOP PAMER
What went well for you day one? Day two?
My driver and irons were really working on both days, and I hit the ball as best as I have in a while. Having confidence in my driver is the biggest thing for me so that was very pleasing to finally have the confidence in it.

What did not go so well day one, day two?
My short game did not work too well, and I did not have confidence in my 5 foot putts.

Had you played twin lakes before? What did you think of the course?
This was my third time playing twin lakes, and I knew that this course was all about ball placement, and putting. This course is often looked past as a tough course, but if you hit a errant tee shot, the course is not forgiving and you will struggle to make par. This being my third time playing the course really gave me an advantage because I remembered where the attackable pins were, and which pins to stay away from.
JACKSON CHOI

What went well for you day one? Day two?
On day one I was hitting off the really well the first day. The second day my chipping was really good.

What did not go so well day one, day two?
On day one my chipping and putting was not very good. Day two I had a couple bad tee shots that cost me.

What was the best shot you hit during the tournament?
On the first day at windmill on the 17th hole I hit a 4 iron from 196 yards into the wind to 3 feet and made the putt for birdie.

What (golf stuff) are you looking forward to?
The stow matches, sectionals, districts, and hopefully states.

Had you played twin lakes before? What did you think of the course?
Yes, I like it, there greens are very nice.
JOSH PETHEL
What went well for you day one? Day two?
I was off the green more times than not on both days, but I felt like my short game really kept me in the tournament. I probably had my best weekend around the green, putting most wedges to 10 feet and in and then making the putt to convert the up-and-down.

What did not go so well day one, day two?
Both days I fought my iron game. I never put myself out of play but I just couldn’t get close to any pins and make many birdies.

What was the best shot you hit during the tournament?
On the first hole of the tournament (#10 at Windmill) I left myself an extremely difficult sand shot with minimal green to work with. I was able to splash it out fairly well and leave myself with a relatively easy 5 footer to save par.

What (golf stuff) are you looking forward to?
October is going to be a fun month. With the Suburban League at Goodpark for the championship followed by Sectional, District, and then (hopefully) States.

Had you played twin lakes before? What did you think of the course?
I had not been out to twin lakes before this tournament, and I was surprised that there weren’t really any easy holes. Nothing was that difficult, but it was a grind to stay around par. For Coop to post a 71, that’s just a really good number for the layout of that course.