Congratulations to Reagan Miele, as she has been selected as Athlete of the Week!  Reagan, a freshman on the girls’ soccer team, recorded her first two career goals in a league win over Wadsworth.  The girls stand at 2-2-1 on the season, with a 1-0-1 record in the Suburban League. 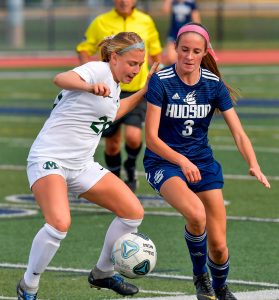 Reagan has been playing soccer since she was five years old.  She loves working with her teammates, and enjoys the opportunity to create a great play.  Reagan also runs track and field, where she participates in the 100, 200, and 300m hurdles. 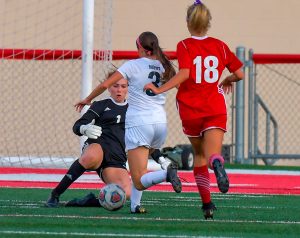 In her free time, Reagan enjoys going to the park and being outdoors. 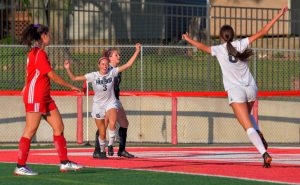 Jamison Cart – field hockey – Jamison is a hard-working, dependable teammate with a great attitude, as she has adjusted to midfield and defensive positions throughout the season.  She demonstrated strong stick skills and defensive play helping to keep Columbus Academy scoreless in the first half.

Emily Dunne – golf – Emily has shot an 88 and 87 in each of the Suburban League Tournaments thus far, to help lead the girls golf team.

Jordyn Hopgood – cross country – Jordyn defeated Medina’s sixth runner on Saturday to break the tie and give the Explorers the title at the Mentor Cardinal Classic.