Along with being part of the 4×800 relay team, Evan will also be competing in the 1600 run, after turning in his top time of the season to win the title at Fitch Regionals!  Evan will compete against the best distance runners in the State on Saturday June 1 at Jesse Owens Memorial Stadium at 5:15p.  Congrats and best of luck, Evan! 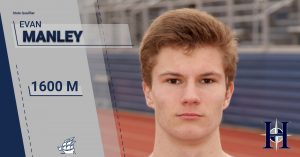