Congratulations to Maddie Roukey, as she has been selected as Athlete of the Week thanks to her performance to begin the season on the softball field.  Maddie, a sophomore right-hander, threw a pair of one-hit shutouts to open the season for the Explorers.  In her first outing, she struck out 12 and was one pitch shy of a perfect game in the Explorers’ 17-0 win over Garfield Hts!  In a league match-up against Brecksville, Maddie struck out 14 while only giving up a sixth inning single to the Bees!  She also smacked a pair of doubles to help the offense.  Maddie has been a key contributor to the hot start by the softball team, as the girls have opened the season 6-0 overall and 4-0 in Suburban League action! 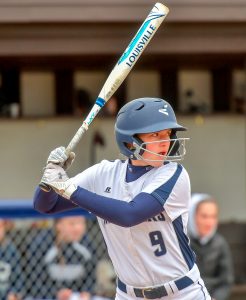 Maddie has been playing softball since she was eight years old and has aspirations to play in college.  She loves pitching and being in control of the game and thrives in pressure situations.

She enjoys art and spending time with her family and friends when she is not working hard on the field.

Kendall Paltani – Lacrosse – Kendall has 20 goals and 10 assists on the young season, and has helped the lacrosse team start the season undefeated!  Great job, Kendall!

Molly Stecker – Track – Molly finished in 1st place in the dual meet at Wadsworth and 1st place at the Medina Invitational with a leap of 5’6″ to defeat 48 other jumpers!  Incredible job, Molly!