Congratulations to Trey Kaminski, as he has been selected as this week’s Athlete of the Week, thanks to his performance on the soccer field during the week of September 17.  Trey, a senior captain, is a center back that has helped lead the team to two consecutive shutouts!  The boys play one of the toughest schedules in the state, and Trey’s leadership has been a big part of their success.

Trey loves playing soccer and feels extremely fortunate to have the tremendous teammates at HHS.  Trey moved to Hudson from Missouri last year and his teammates have made that move an enjoyable experience for him. 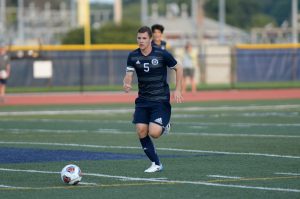 Trey plans to attend college next fall and major in computer engineering.  He maintains a 4.05 GPA and leads in the classroom as well.  Trey also enjoys playing video games when he is not with his team.