Congratulations to senior Ryan Sarkisian, as he has been selected as Athlete of the Week thanks to his performance during the week of September 3.  Ryan, a senior forward on the soccer team and kicker on the football team, has amassed 4 goals and 2 assists on the young season. 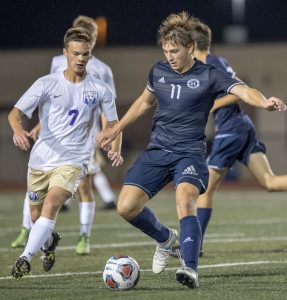 Ryan serves as captain of the soccer team and hopes to continue his playing career next year at the University of Mount Union or IUPUI.  Ryan maintains a 3.8 GPA and loves the team aspect of sports that brings people together.  When he’s not scoring goals or kicking off for the football team, he enjoys spending time with his friends.